It’s official. Last week we received an important piece of paper in the mail advising us we can now proudly declare ourselves ‘Australian Demeter Biodynamic in conversion’. 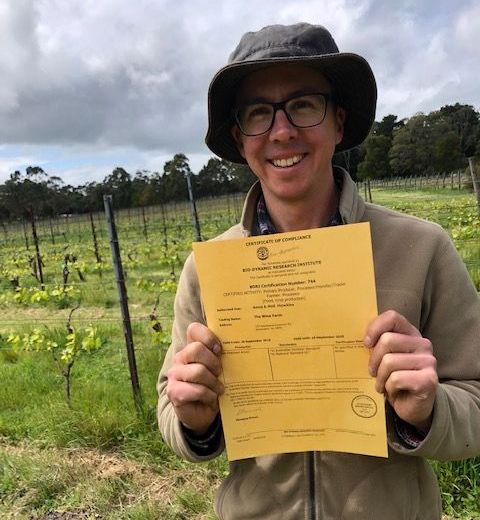 But what the hell does that mean? Let’s break it down.

First, a quick re-cap on the biodynamic bit and why we’ve chosen to farm this way. Farming organically (ie without the use of chemicals) has long been important to us from a health point of view – both for those consuming the products (especially us!) and for the land they’re grown in. Keeping harmful toxins out of the system is nothing to sneeze at, but biodynamics takes things a few steps further. No we’re not talking about the esoteric crap that so many associate with biodynamics thanks to a small but vocal group who like to espouse the powers of the cosmos. We’re talking about outcomes. Specifically the results of evidenced based methods championed by the agriculturally savvy branch of biodynamics, Demeter Australia, that are starting to capture the attention of growers around the world. In very basic terms, this branch focuses on maximising the health of your soils by inoculating them with microbes to increase the ‘good’ bacteria in your soil. This in turn aids in the creation of humus – digested organic matter that holds everything plants need to flourish – promoting healthy root development and ultimately thriving plants. Humus is also a powerful carbon sink, so building the humus content of your soils is really good for the planet, which makes us feel good too. But selfishly, we basically want to make the best wine we can, and by improving the health of our soil we’re boosting the naturally available nutrient content for our vines. And more nutrients equals more flavour. Win.

But why do we need to certify? Good question, and when we first bought this property and set about converting it to organic, we really didn’t imagine we would need to take this step. We were doing it simply because we believed it was the best way to take care of our land and make good wine. But buying organic and biodynamic products for our young family has become increasingly important to us and unless you know and trust your grower, without third party endorsement it can be a minefield of ambiguous language, Chinese whispers and tall tales. The word ‘natural’ bears no relation to the way in which a product is farmed. Saying you ‘farm using biodynamic principles’ doesn’t explain that sneaky stash of glyphosate you pull out of your shed every winter before the weeds get on top of you. The smoke and mirrors are endless. So we decided to certify purely to give those customers who care about the provenance of their food (and wine) the reassurance that ours has been farmed cleanly, and nutritionally supercharged in the biodynamic way if they’re into that too. We’d love it if all our customers could visit the farm and see the life teeming in the soils for themselves, but that’s impractical so we’ll soon have the universally trusted Demeter logo on our bottles to offer them the assurance they seek.

And why certify with Demeter? There are at least six organic certification bodies in Australia and they all need to adhere to the National Organic and Biodynamic guidelines set by the Australian government at a minimum. However, the devil is in the detail, or in Demeter’s case the proof is in the pudding. As far as our research tells us, all of the certifying bodies are set up to minimise the existence of systemic and synthetic chemicals in the final product by stipulating their use throughout the process of farming and production. That’s all good, and Demeter is no exception. However with Demeter, as well as assuring the cleanliness of the final product, they are committed to working alongside their farmers to improve soil structure, build the humus on which that soil depends for its fertility and resilience, foster the growth of healthy plants and ultimately achieve produce of the highest quality in terms of both flavour and nutrient density. Australian Demeter Biodynamic is increasingly becoming recognised as the highest certification for organic farming in the world. So that’s who we want on our team.

While other certifiers seem to rely on paper trails to tell them what’s in the products they stamp, Demeter actively works with its producers to effect positive change. Audits are not a looming date in our diary to dread but something we look forward to as an opportunity to grow. We’re learning new skills and seeing the health of our farm and the flavour of our grapes improve before our eyes. And when it comes to our final audit, it’s far from ticking boxes. Basically if we can’t show first class soil structure we won’t get certified. But Demeter doesn’t want anyone to fail. They are a not-for-profit outfit, made up of kind, knowledgeable and decent people – mostly farmers themselves – who in our experience are genuinely driven to help more farmers adopt their tried and tested method to achieve superior results for the greater good. And no, we’re not on the payroll, just very impressed.

So what does all this mean for The Wine Farm?

We bought this property five years ago and began farming organically from the get-go. Two years ago we began our journey with Demeter Australia who visited our farm, walked the property, looked at the soils and advised we were chemical free (aka organic) and ready to take the next step. We started our training, embarked on the paperwork and on 10 May 2018 sprayed our first biodynamic preparation on the vineyard. Two months ago we underwent our third audit, and last week we found out we passed. This means that any wine made from grapes in the ground from this point on can be labelled ‘Biodynamic in conversion’. Our 2020 vintage will be the first to qualify. Then, once we’ve managed biodynamically for three years (so May 2021) and assuming we pass the next rigorous audit – demonstrating that all important structure when the Demeter shovel sinks into our soil – we can drop the ‘in conversion’ bit and call ourselves fully fledged Demeter Biodynamic.

Sure there’s a lot more manual labour involved in farming this way. Some days it’s literally back breaking and we can understand the temptation of using the shortcuts provided by herbicides, systemic chemicals and synthetic fertilisers. We’ve been told more than once that we have rocks in our heads, but we’re confident we’re doing things the right way – by our land, our plants, our wine, the planet and you guys.